Automation is critical to scaleable Customer Success, and our Rules feature is easily one of our most popular, helping teams automate everything from risk detection to customer engagement. But, there were a couple limitations in how Rules worked. Namely, we didn't support delays between actions - either all were applied or none were. You also couldn't have multiple actions of the same type as part of the same rule set (i.e. you couldn't create multiple tasks/messages/etc with a single set of rules). Well, good news...

As of today, both those limitations have been addressed alongside a slew of other improvements to our automation capabilities 🎉 To showcase this major improvement and give the feature a more accurate (and standard) name, we are also rebranding Rules as Playbooks. Let's dig into the numerous automation improvements made, shall we! 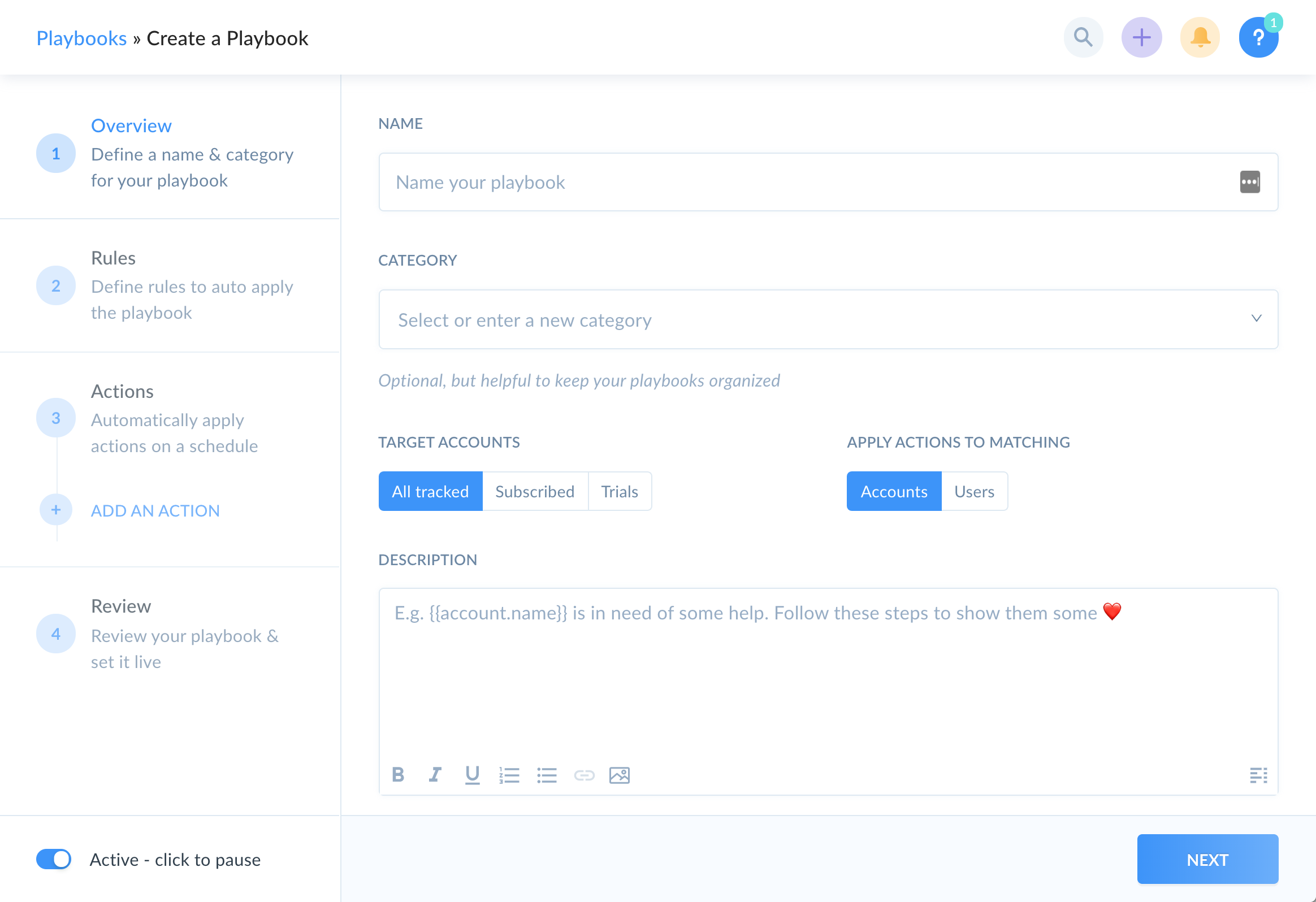 Want a more detailed overview of the Playbook builder? Just browse the walkthrough below!

Applying a Playbook's actions on a schedule 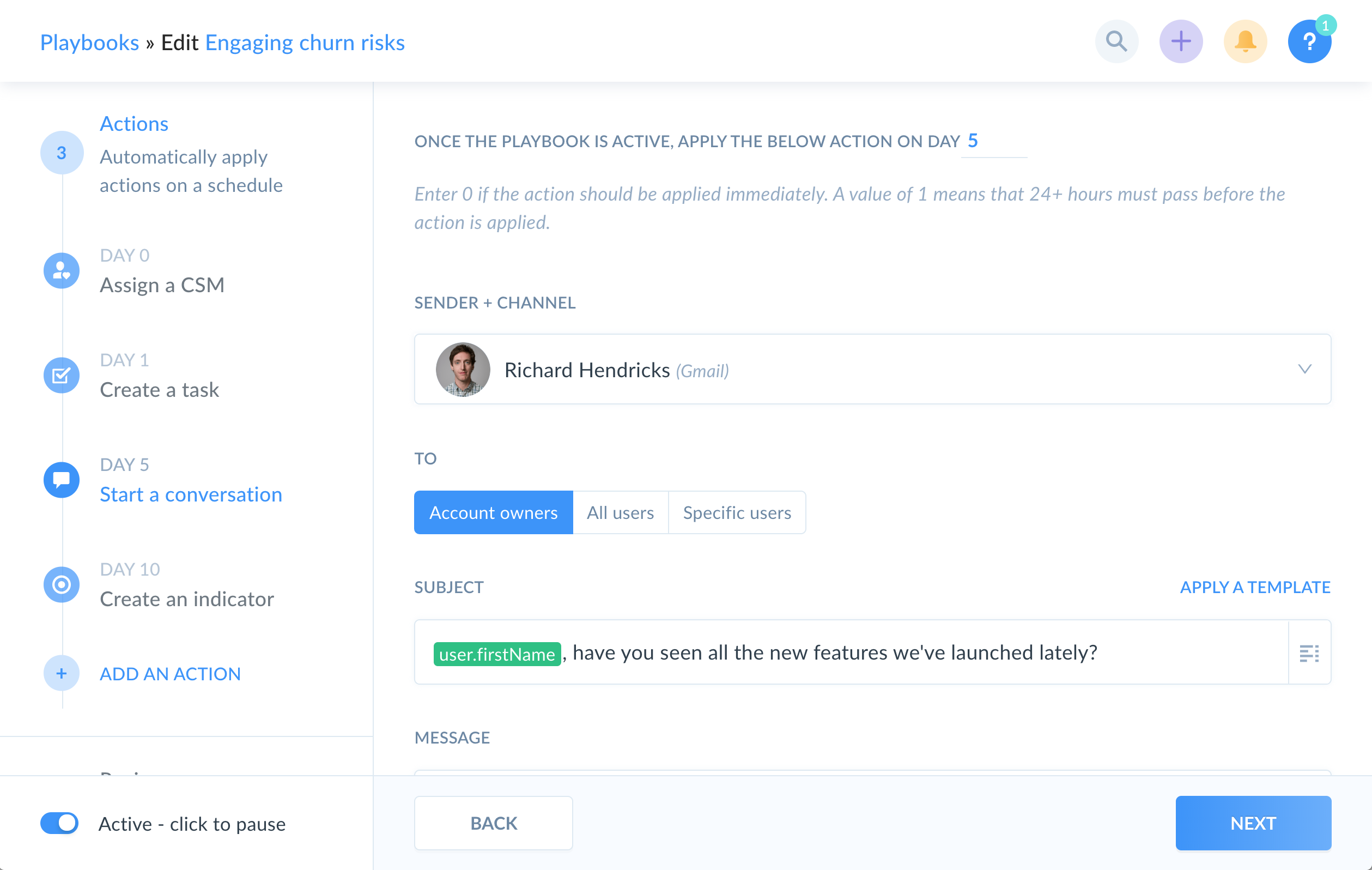 Playbooks now give you complete control over which actions to apply to accounts/users on which days. You can choose to auto-assign a CSM as soon as the Playbook is applied to an account, create a task for that CSM on day 3, send an email to the account on day 7, and create another task for the CSM on day 14.

Giving your team more direction and transparency when Playbooks are applied

Automation can often lead to confusion - confusion over what the automation actually did and what it intends to do next. However, our new tools showing the exact progress of an applied Playbook will turn that confusion into confidence!

To start with, when viewing your accounts, there are new columns avaiable for each Playbook you create. When you enable a Playbook's column, we'll report both the date the Playbook was applied alongside the completion percentage of the Playbook's scheduled actions. Click on that progress to see a more detailed timeline of past and future actions! 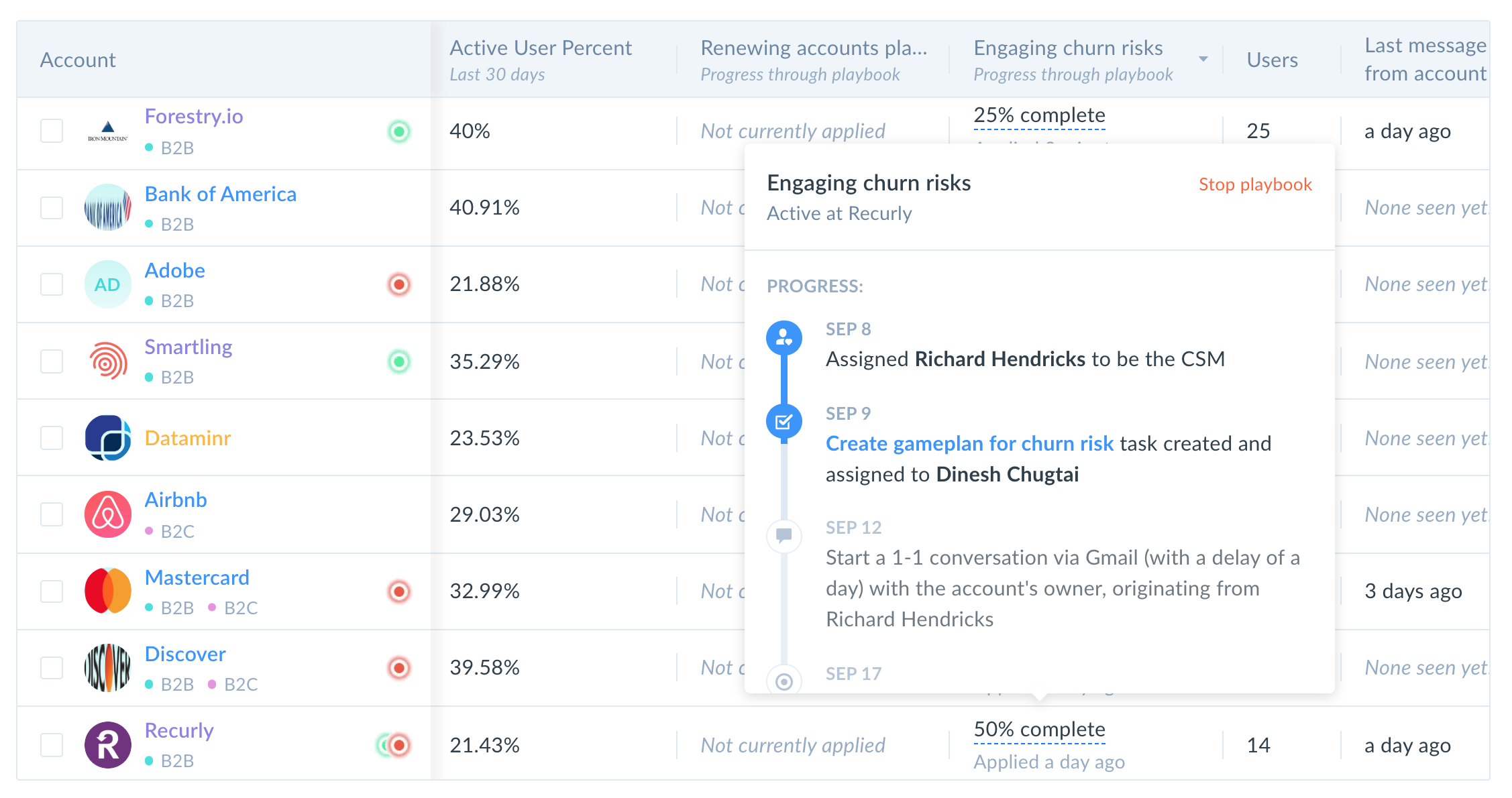 Additionally, when viewing the dashboard for a specific account, we now list a history of all current and past applied Playbooks to that account. Click on a specific Playbook to once again display its progress. 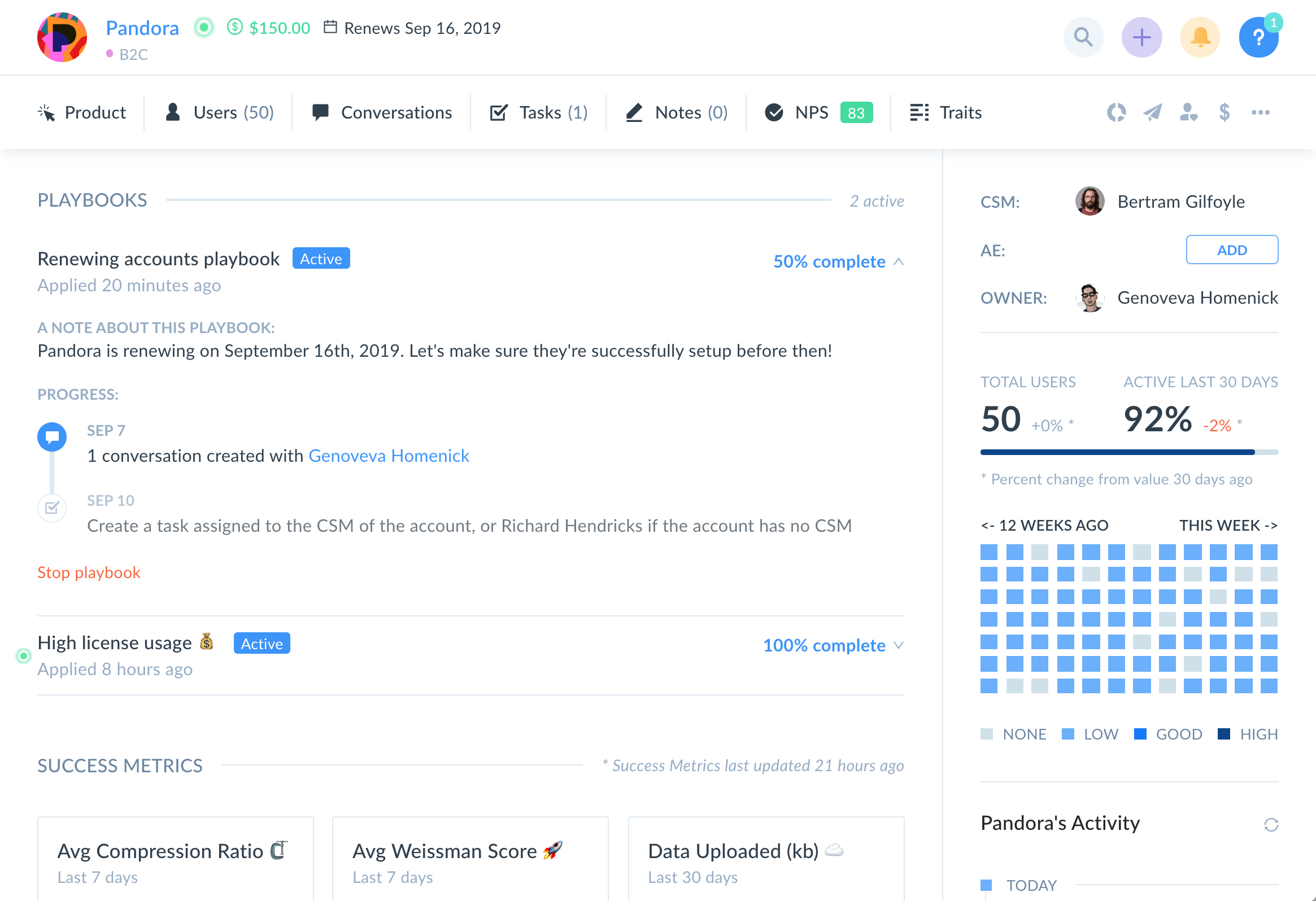 If you look closely at the expanded Playbook for Pandora above, you'll see a brief note that says "Pandora is renewing on September 16th....". When building a Playbook, there's now a new "Description" field. You can leave a note like this in that field to give your team more direction when viewing the Playbook, complete with account/user varaibles. We'll then 'compile' that note with the details for the account/user so that your team has immediate access to the most relevant bits of data for the Playbook!

Preventing a Playbook from executing any further

Sometimes, you may find yourself wanting to end a specific Playbook. For example, say you create an onboarding Playbook to automatically apply itself to all new customers, but one customer signs up to only push back their implementation of your product for a few weeks. You can now 'force stop' a Playbook from performing any further actions by clicking the "Stop playbook" link displayed with the Playbook's progress.

When stopping the Playbook, the team member doing so can also leave a note detailing their motivation for doing so.

Finally, if you'd like to completely prevent the Playbook from applying itself any further to ALL accounts/users, you can switch the Playbook into a 'paused' mode when creating/editing it. 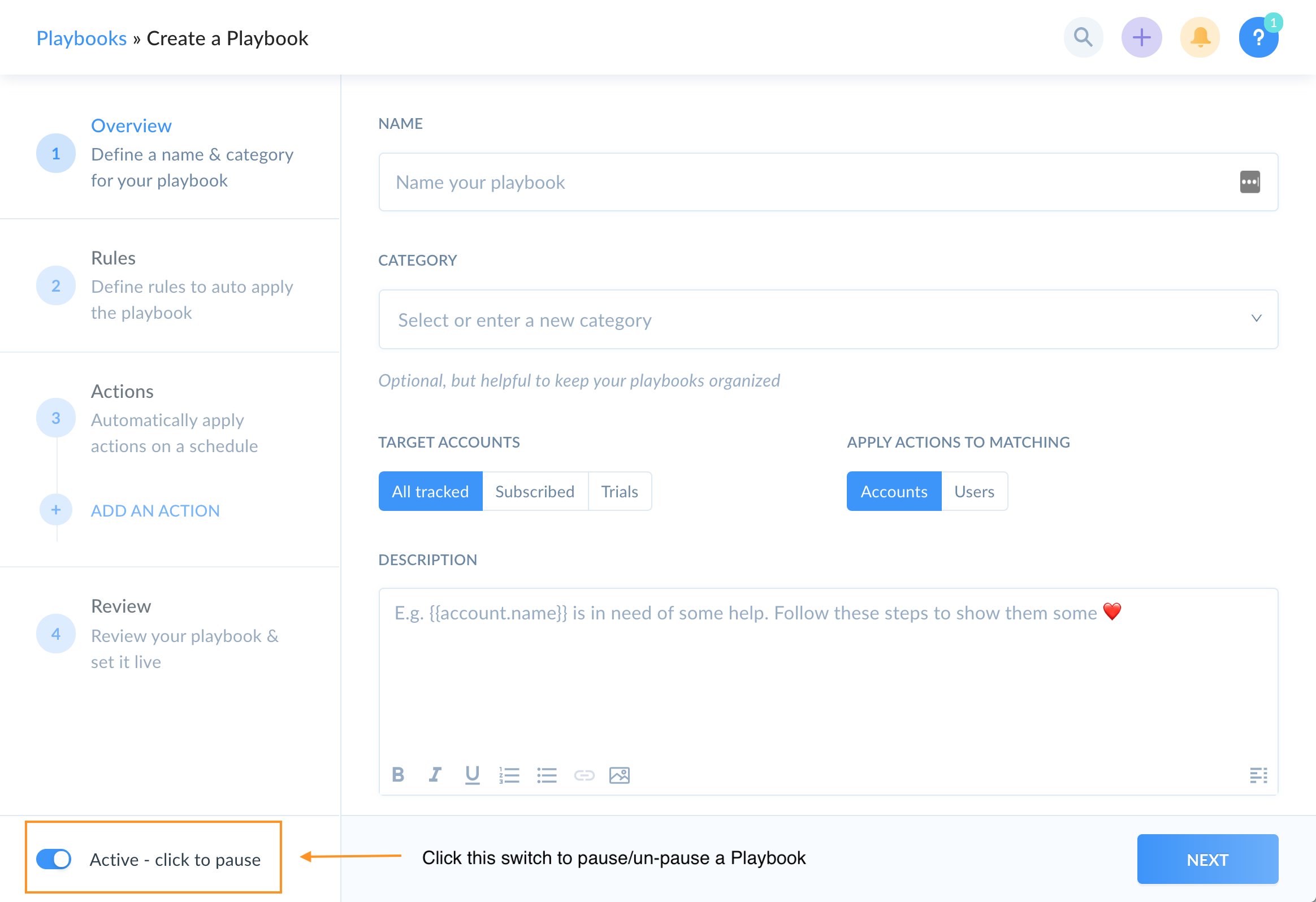 That's it for this release, but we'll be back very, very soon with another launch of our upcoming health scores feature!

Oh, if you'd like to learn a bit more about Playbooks, be sure to check out our help doc. Until next time!

To help us better personalize your demo, we'd like to learn a bit more about you :)

To help us quote you the best price, we'd like to learn a bit more about you :)